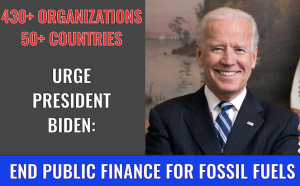 We are encouraged by the Biden Administration’s initial steps to implement a ‘whole-of-government’ approach to the climate crisis, as set out in the January 27 “Executive Order on Tackling the Climate Crisis at Home and Abroad.” We are writing now to provide our recommendations on a critical piece of the international agenda described in the Executive Order — ending public support for fossil fuels around the world by “promoting the flow of capital toward climate-aligned investments and away from high-carbon investments.” We urge the Biden Administration to act swiftly to end new financing for all parts of the fossil fuel supply chain (including for gas), stop new U.S. fossil fuel support within 90 days across all government institutions, and work with other nations to end fossil fuel financing.[1]

As you know, averting the worst impacts of the climate crisis requires a rapid transition away from fossil fuels. There is simply no room left for new investments in long-lived carbon intensive infrastructure. Still, public agencies continue to provide tens of billions of dollars to finance and support such investments each year. This has to stop.

Each of these processes addresses an important part of the overall challenge of eliminating the flow of public money to fossil fuel infrastructure. The goal should be consistent across these processes: to articulate policies that are based on climate science, comprehensive in their scope — covering all institutions, all fossil fuels, and all stages in the value chain — and stringent in their requirements.

Climate science shows that we need a rapid transition from fossil fuels, the single biggest source of global greenhouse gas emissions, to renewable energy in order to limit global warming to 1.5ºC. The IPCC’s P1 trajectory, which takes a precautionary approach to negative emission technologies, shows that the use of coal, oil and gas needs to drop by 78%, 37% and 25% respectively by 2030 compared to 2010 levels to keep warming limited to 1.5ºC. According to the 2020 UNEP Production Gap report, between 2020 and 2030, global coal, oil, and gas production would have to decline annually by 11%, 4%, and 3%, respectively, to be consistent with a 1.5ºC pathway. And in the electricity sector, there is no carbon budget left to build new gas and coal-fired power plants — many existing ones will need to be retired before the end of their normal economic lives. This means we should be focused on retiring fossil fuel infrastructure, and stop financing new infrastructure.

Despite the need to rapidly reduce fossil fuel production and use, G20 governments have provided more than three times as much in public finance for fossil fuels as for renewable energy every single year since the adoption of the Paris Agreement. U.S. institutions, such as the U.S. Export-Import Bank (EXIM) and the U.S. International Development Finance Corporation (DFC) (and its predecessor, the Overseas Private Investment Corporation) have provided billions for new fossil fuel projects annually, together averaging $4.4 billion per year over the past decade.

Over the past 18 months, other leading governments and institutions have taken important steps to shift away from government-backed finance to the fossil fuel industry:

This momentum builds on policy commitments to exclude finance for coal-fired power that the U.S. led under the Obama Administration, including through Treasury guidance, U.S. leadership at the MDBs and OECD, and through a 2013 joint commitment with other like-minded nations to end overseas coal finance that ultimately led to the Coal-Fired Electricity Generation Sector Understanding in the OECD Arrangement.

Leadership on this agenda from the U.S. would have a considerable global impact. Thank you for your consideration of these recommendations, and we look forward to hearing from you.

[1] Nothing in this letter should suggest that the U.S. or other countries should end important bilateral support for programs seeking to improve transparency, accountability, and good governance of extractive industry operations globally or in specific country contexts; nor their support for similar critical programs carried out via multilateral institutions and initiatives.

[2] While the prospect is highly unlikely, very rare exceptions for fossil fuel projects intended solely for domestic energy consumption only in Least Developed Countries could be considered, but only after a thorough scenario analysis of all viable alternatives for meeting energy access demonstrates clear necessity and no viable alternatives.Such an assessment must consider price competitiveness over the full lifetime of the project from conception to full decommissioning, all costs of externalities, safety, and adherence to international best practices and environmental and social due diligence. Such conditions have not been demonstrated for any existing projects.

[3] The latest research on gas, particularly, U.S. LNG exports, demonstrates that lifecycle GHG emissions from gas are significantly worse than previously reported. Greenhouse gas emissions from U.S. LNG are just 27 to 33 percent lower than coal. Using more gas would not help countries meet even the modest emissions reduction targets required in the International Energy Agency’s Sustainable Development Scenario (a scenario that far exceeds a pathway that would limit warming to 1.5°C). This is true not only for using gas in Europe, but also for Japan, China and India. Over the lifetime of U.S. LNG projects, emissions will be significantly higher than clean investments such as solar, wind, storage, and efficiency measures. Lifecycle GHG emissions for solar power are less than 7 percent of LNG emissions; emissions for wind power are even lower, less than 2 percent of LNG emissions. We urge the administration to follow the latest science and exclude new gas infrastructure from eligibility for all future government financing. 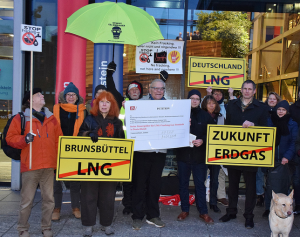