The water is ours damn it! Water commoning in Bolivia 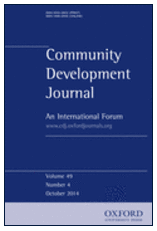 The water is ours damn it! Water commoning in Bolivia
Alexander Dwinell and Marcela Olivera

Abstract:
„This article explores understandings of the commons by showing its changing definition and application in daily life. The Bolivian experience both over the centuries and since the Water War of 2000 illustrates the malleability of the term. The commons operate according to who uses it (uses) and how it has been used (customs). The 2000 Cochabamba Water War provides the historical background and context for a perceived victory for the commons over privatization, followed by the Morales government’s use of a ‘public ownership’ campaign to usurp the power of commons from the people. The government’s use of a ‘public rights’ framework removes the power from the people and concentrates power in the state. Confronted by successful community organizing to keep the management of the commons at the community level and under popular control, the state intervened to reduce local autonomy and make the people dependent on government decision-making. Seeking to maintain local control and autonomy, the water committees in Bolivia continue to resist the state’s effort to manage the commons.“
Zum Artikel