Waves of resistance: From Greece to India, people safeguard water for the common good

Last month, 1,500 organizers in Thessaloniki, Greece risked arrest, placing unofficial ballot boxes by nightfall on street corners throughout the city. Their bravery paid off, as the next day more than 200,000 residents cast a vote on the pending privatization of their water system. Hundreds of volunteers worked around the clock to tally votes under the watchful eye of international observers. As morning dawned, a crowd gathered to hear the results. Before long, a huge cry of victory rose up: the “no” vote won by a resounding 98 percent. Once again, the people’s choice was clear: keep our water in public hands! 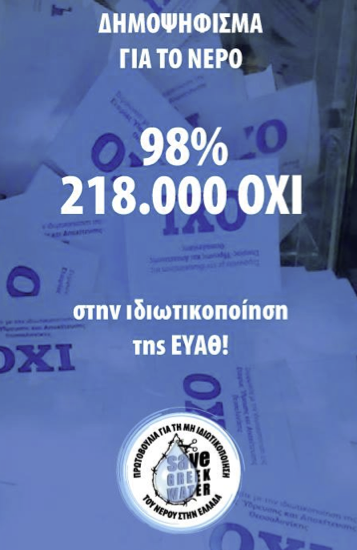 You see, in the face of Greece’s flailing economy, global lenders have put enormous pressure on Thessaloniki to privatize its water supply, arguing that doing so would save the city money through promises of cost-cutting and efficiency measures. And Thessaloniki isn’t alone — communities around the world are feeling the heavy hand of lenders (primarily the World Bank) pushing private water as the answer to their water woes. But the residents of Thessaloniki — like those in Jakarta, Indonesia and Nagpur, India — know that with privatization come rate hikes, empty taps, mass worker layoffs and dangerous health and safety violations.

Indeed, though Thessaloniki’s local government continues to doggedly pursue the private water contract, its efforts were recently dealt a critical blow. Just a few weeks ago, Greece’s highest court made a landmark ruling that private water violates the government’s constitutional obligations to protect peoples’ health and well-being. Campaigners in Thessaloniki are expected to launch a new legal action immediately, seizing this precedent to save their water from a corporate takeover. […]